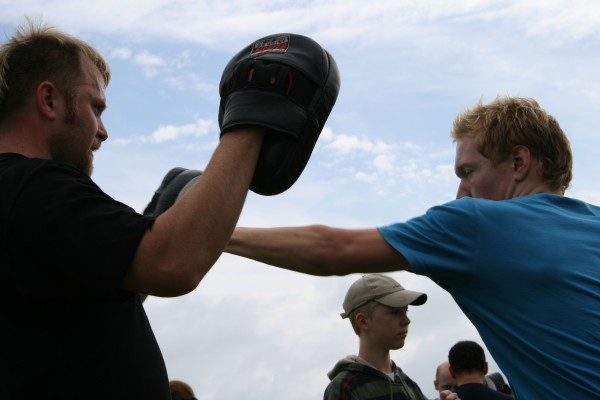 A martial system that is built on the principles of Yin & Yang: the two inseparate oppositions, where the soft defeats the hard and vice versa!

The techniques of the Wudang Tai Chi Chuan Hand Form are based on Self-defence that, among others, improves on the balance, speed, agility and inner strength of the practitioner.

Tai Chi is basically not an offensive Martial Art, but a defensive, which is based on using the force of the attacker against himself by either deflecting or turning it against himself, expending a minimum of own force.

Wudang Tai Chi Chuan is a Martial Arts system that is built on the principles of Yin & Yang: the two inseparate oppositions, where the soft defeats the hard and vice versa! I.e. if an attacker charges in at full speed to punch (Yang) it’s a bad idea to try and stop him with a matching force (Yang). Rather take a step to the side (Yin) and gain control of the arm of your opponent, after which you can follow up by pushing or punching, expending your own force (Yang) at the attackers weak point (Yin).

Another founding element of Wudang Tai Chi Chuan is this: (Excerpt of “the 5 Classics” (Tai Chi Classics) “If the opponent does not move, then neither do we, but as soon as he moves, we have already moved”. – this means that as long as he does not move, we are not moving, but we are 100% ready and mentally open for whatever might come. This means that as soon as he sets to launch an attack, we are able to launch our counter.

To learn the many Self-defence techniques of Tai Chi, you need a partner to practise with, one who can pose as the attacker. There are instructors who claim, that you can learn Self Defence exclusively by practising the Hand Form.. But we do not believe that!

We (Practical Tai Chi Chuan Denmark) believe that, the closer we can get to a realistic situation in practising the Self Defence techniques (of the Hand Form) with a partner, meaning to simulate attack and defence, the better prepared one will be.

Immediately it sounds silly to invest in losses in a Self Defence situation and neither should you. But if you wish to use the force of your opponent, you must learn to relax and ‘listen’ for the force in order to use it. It is at the gym you must invest in the loss by letting you partner attack you repeatedly. Initially this will result in a lot of ‘losses’, but it doesn’t really matter since it’s in the gym, right? As you learn to relax and ‘listen’, in time you will be able to read your opponents intention and turn them to your advantage at Self Defence.

The objective in Wudang Tai Chi Chuan is to be relaxed but vigilant, in order to defeat even the greatest opposition. When encountered by opposition, our natural reaction would be to tense and ‘strike’ back. In the world of Tai Chi size does not matter, if one understands to utilize the principles of softness defeating hardness and vice versa.