Pushing Hands are partner exercises developed in the 16th century from Self Defence techniques that improved upon skills useful in close quarter fighting. It is said that Pushing Hands in Wudang Tai Chi Chuan is the way to understand the aspect of the inner martial art concerning reflexes, softness, timing, coordination, position, distance, footwork, balance and the principle of leverage. The Pushing Hands exercises practised in Wudang Tai Chi Chuan are very practical in relation to close quarter fighting and in certain partner exercises, such as Chin Si (Reeling Silk), but special concept or abilities are also practised.

Tui Shou translated directly from Chinese means Pushing Hands, which is misleading, as Pushing Hands is much more that pushing and using ones hands. When we in Wudang Tai Chi Chuan combines these exercises with Self Defence, we utilize techniques of both pulling and locking joints as well as forearms, elbows etc. 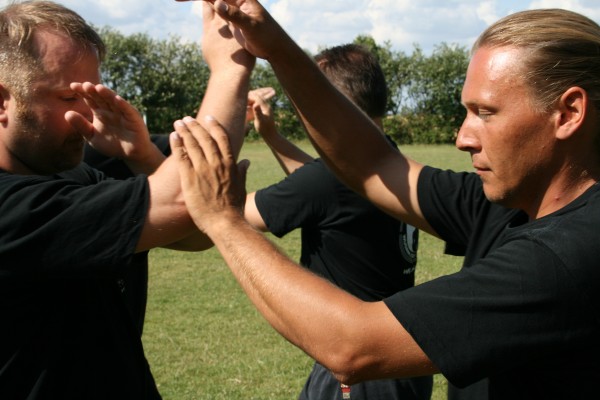 The essence of Pushing Hands

The essence of Pushing Hands is ‘Dong Jin’ – to understand force (Dong: to understand) (Jin: ‘gathered’ force or ‘Technique of force’)

To understand the force one must learn the 3 steps:

The basic elements of Pushing Hands

One of the most important elements we practise with Pushing Hands is Ba Jin (the Eight Forces) and Wu Bu (the Five Steps/Directions). These are found in various combinations in the Pushing Hands exercises. Together Ba Jin and Wu Bu are Shi San Shi (the Thirteen Tactics), which is also an old name for Tai Chi Chuan. To utilize the application of “the Thirteen Tactics” we have “the Five Close Quarter Strategies”. These elements are most applied tactics in the Wudang Tai Chi Chuan Pushing Hands practise. 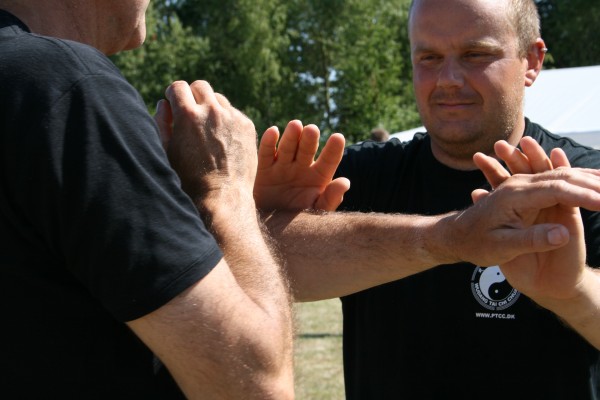 These 8 forces are in most cases referred to as specific techniques, but that is not entirely true. The 8 forces are utilized when attacking or defending against an attack. We practise them when doing Self Defence techniques with a partner, but also in the Pushing Hands exercises we constantly utilize these forces. One of these exercises that most are familiar with are “Four Directions”. The name refers 4 of the 8 forces, Peng, Lu, Ji and An. Another exercise is “Four Corners”, whose name refers to the last 4 of the 8 forces, Cai (Tsai), Lie, Zhou (Joe) and Kao. The last four forces however, are also practised in “Four Directions” as Self Defence techniques. Below I will shortly explain the meaning of each of these forces.

The more of these forces than can be combined in a technique, the stronger it will be.

These forces are found in everything we do, also Hand Form and Weapons, making them a tool to analyze what we are doing. It is said that Tai Chi Chuan should be learned in 3 steps. First one learns the technique, then it is analyzed after which it can be utilized. Most people (without knowing this with certainty) forget the second part, but this would be quite natural since it is the most time consuming in our busy life. Those who certainly should do so are those who wish to be instructors.

“The first steps” are steps to the right, left, forwards, back and centre.

It is the four directions one moves in, and all the directions starts from the centre, which constantly changes in relation to your own position. The centre is not just physically, but also mental. To be able to move in the four directions, one must be balanced (centred).

Each of the “the Five Steps” are further connected to “the Five Elements” (Chinese philosophy): Metal, Fire, Wood, Water and Earth: Earth is the Centre as all the elements can be found in or on the Earth, just as all directions starts from the centre. Metal are stepping forwards, Wood is stepping back, Fire is looking right and Water is looking left.

The above-mentioned Ba Jin (the 8 Forces) combined with Wu Bu (the 5 Steps) together makes Shi San Shi (the 13 Tactics), which are used in innumerable ways at Self Defence and are practically limitless in their applied combinations.

In order to apply Tai Chi Chuan techniques in Close Quarter Combat one has to understand the strategy that controls them. In the Song of Tai Chi Pushing Hands it is said, that a force of a hundred grams can defeat a force of a thousand kilo. This demands that we use intelligence and skill instead of muscle. This also demands that we follow the five principles of Close Quarter Combat:

By obtaining this five-step strategy you will able to achieve, with a minimum of force, maximum effect. You can deflect any attack in a relaxed manner. While keeping the contact, you use the least amount of force necessary to deflect the attack from the original space to the void. In doing so, you can detect any change in the attack and react to it. This would not be possible if you used force to block the attack. Your movements must be harmonic and coherent.

Be present when training Pushing Hands

When training these Pushing Hands exercises it is important to “be present” mentally. Once you have been doing these exercises for some time, it is easy “to do” the exercises by default, meaning that you’re talking or thinking about other things while practicing. By doing this, you will get the exercise, but no more than that. It is important to “be present” and a 100% conscious of the force your opponent (Jin) even when you know where the force will come from as it is a fixed exercise. After practising the various choreographed exercises, it is important to practise the free Pushing Hands (Tui Shou), in which you do not know what your partner/opponent are going to do. This is where you discover, if you are able to use what you have learned. 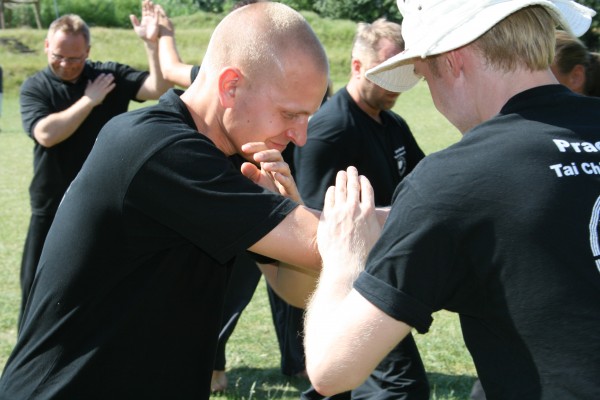 Four Directions refers to the four corners of the world and identifies with the four forces Peng, Lu, Ji and An, which again refers to the four Trigrams; Chien, Kun, Kan and Li. Four Directions are the most important of all the Pushing Hands drills as you practise the one most fundamental part of Pushing Hands, to “listen” for force. The exercise can be combined with a number of different Self Defence techniques where locks, sweeps, throws, punches etc are used. The drill itself is about registering the intentions of the partner and to change accordingly, like only doing one punch instead of two or stepping forwards and backwards.

Reeling Silk refers to the work with peeling the silk off the cocoons. To draw off the silk, an even and smooth force is needed, without sudden pulls or changes in direction. If pulled too fast, the silk will break and if pulled too slow, the silk will bundle. In this Pushing Hands drill the practitioners must be relaxed and move continuously without sudden breaks. One must always have contact with the partner and follow his movements. One who truly understands to utilize the principles of Reeling Silk will be very sensitive and able to register any changes in the partner very quickly. In Reeling Silk we train a concept called “Gyrating Arms”. This means, that when the partner lays pressure on your arms, you follow the force and bring your arm/hand around in a counter. This is using the force of the partner against himself. This is what is referred to, when it in the Tai Chi Classics are saying that a 100 grams can defeat a 1000 kilos.

Zhou Lu is the most advanced Fixed Step Pushing Hands drill, in which forearm or elbow are utilized to deflect and attack and locking the opponent as a counter. It is a drill for “Inside the Door” students and will not be described further here.

In Seven Stars Step one moves seven steps forwards and backwards in a zigzag line, always stepping in an 45° angle (obliquely to the side). The name Seven Stars refers to the constellation “the Big Dipper”. The attacker moves seven steps forwards, pushing alternately with the hands while the one moving backwards, deflects the attack to the side. In Seven Stars Step we practise several skills, but most importantly is footwork, distance, timing, position, coordination, focus and “Body Evasion”. In relation to techniques of the Hand Form, Weapons and Nei Kung, you practise evading and countering. Seven Stars Step is typically the first Pushing Hands drill you learn in Wudang Tai Chi Chuan.

In Nine Palace Pushing Hands the same skills are trained as in Seven Stars, but here the attacker are stepping in a cross and push only twice as the one stepping backwards and sideways are deflecting the attack. Here you constantly change, two pushes and two deflections then changing. The name refers to “the Eight Directions and Centre”. The drill is typically taught after about a year of training.

The Uprooting Wave is the most advanced of the eight Pushing Hands drills. The concept of the drill is a wavelike movement and utilizing the entire body force and ca be transferred to the other Pushing Hands drills, Self Defence, Weapons and Nei Kung training. There are many variations and it is normally done in Moving Step, but can be done with Fixed Step. It is a drill for “Inside the Door” students and will not be described further here. 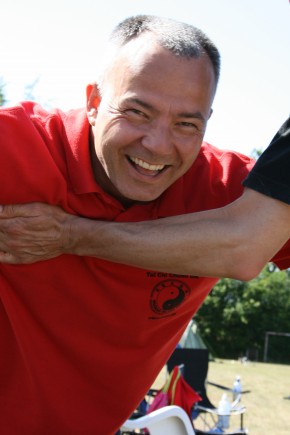 If you wish to know, if you are truly able to utilize the Pushing Hands techniques for real, without having to battle for life or death, then there are plenty of international competitions to test your technique against opponents set to win. You will face opponent that you do not know and are not used to compete against, making this a true test on your “listening” skills.

If you really wish to learn how to use your opponent’s force, then you must relax and “Listen” for the force in order to use it. It is in the gym that you must invest in losses by letting your partner attack repeatedly. In the beginning you will “loose” repeatedly, but since it is in the gym, it doesn’t really matter, right? As you learn to relax and “Listen”, you will be able to read your opponents intentions and turn them to your own advantage.