Qigong means cultivation of energy and are health exercises that can vary from the very simple to more advanced and very demanding Qigong exercises. Tai Chi Qigong in general has a large aspect of health in it’s own right and therefore it has become an essential part in training Wudang Tai Chi Chuan. The Tai Chi Qigong health exercises aids in giving you a good foundation, both physically and mentally, indiscriminate to age or level, and we have exercises for everyone without regards for sex, age or constitution. 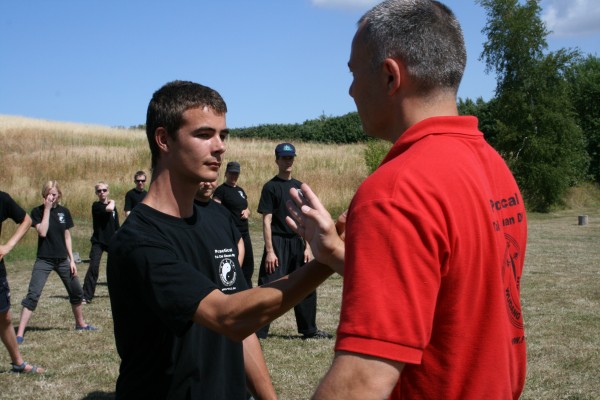 Basically there are 2 types of Qigong:

In the static Qigong one will be holding different positions in one or several minutes.

Static Qigong is in som ways more demanding, as one f.eks. are standing completely still with the leg bent and arms above shoulder level for several minutes. At first one will, of course, train at the shoulders and legs, but this is where strength of character is built as well as the ability to relax. In time many of these exercises becomes meditation of sorts, helping to relieve stress and finding inner peace. Static Qigong is very strengthening for muscles, tendons, joints and bones of the body.

In the dynamic Qigong the same movements are repeated many times. There are many different Qigong exercises – some ‘only’ have health aspects, while others are basically Self Defence techniques as in the Hand Form. A Qigong exercise could be to just raise and lower the arms while bending and stretching the legs. A simple exercise that anyone quickly can learn and which is very effective against restlessness in the legs and pains in the arms and shoulders. The key in these exercises is to perform the same exercise repeatedly to gain more relaxation as one seeks to improve the technique. 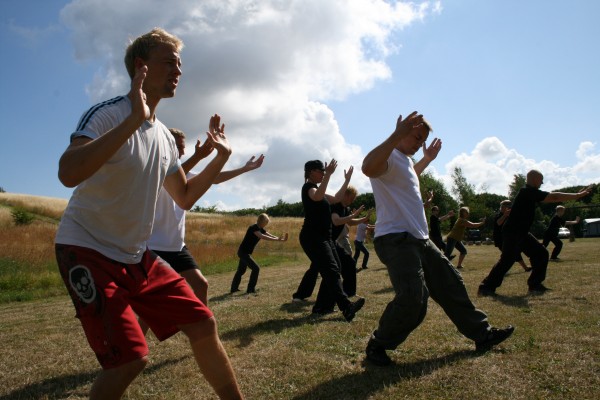 The mouth should be closed, the tongue rests lightly against the roof of the mouth, just above the front teeth while breathing naturally relaxed through the nose as one performs the exercises slowly and relaxed. When moving slowly and breathing like this, the lungs will expand downwards instead of outwards, which makes the breathing deeper and longer. As you gain a deeper and longer breath, the oxygen will stay in your body for a longer time, enabling the body more time to absorb that oxygen – more oxygen for the cells improves your health.

The Tai Chi Masters adopted this breathing technique from the tortoise, which moves slowly and lives long..

If the schedules or location of the clubs doesn’t fit into our daily routine and you don’t have the opportunity to partake the weekend courses, then there is the possibility to invest in an instructional DVD with different Qigong exercises. Sifu Torben Rif has, among others, made a Qigong DVD in which he goes through the Tai Chi 9 Qigong exercises in detail. The DVD is easy to follow and the exercises are very basic, The DVD however, can never replace an instructor, but be a helpful tool or an alternative, if it’s not possible to follow classes in a club.